I was so excited to go to Denver this past week because I got to see the Denver International Airport for myself. DIA is this huge airport that went 2 billion dollars over budget. With a variety of weird sprouting out of this airport, from Nazis murals to a demon horse gatekeeper, it is no wonder that the airport is such a hotspot for conspiracy theorists around the world.

When approaching the Denver International Airport via cab, you pass this huge 6 foot tall blue horse with red eyes at the front (not joking). His name is Blue Mustang, nicknamed Blucifer. This horse actually killed its sculptor Luis Jimenez when a piece fell off and severed one of his arteries y’all like wtf .

My question, why is he blue??

While there are a ton of theories for what this airport can potentially contain, the most plausible one to me is the post-apocalyptic bunker. A lot of people say it’s a post apocalypse bunker for the president and other influential government and wealthy officials.

President Obama allegedly paid a visit to Denver in 2012 on “official business”. But his visit coincided with the passing of the comet Elenin. This comet was apparently going to be key in the end of the world phenomenon that happened in 2012 (remember the movie??) Well, if this isn’t a complete stretch, then I think we have pretty good evidence that SOMETHING is in Denver.

MAYBE, stay with me here, there is a bunch of underground bunkers in Denver and the Denver Airport is like the main meeting spot source of food/entertainment. Post apocalyptic mall/strip club? Lol we know how people are. We need our vices. 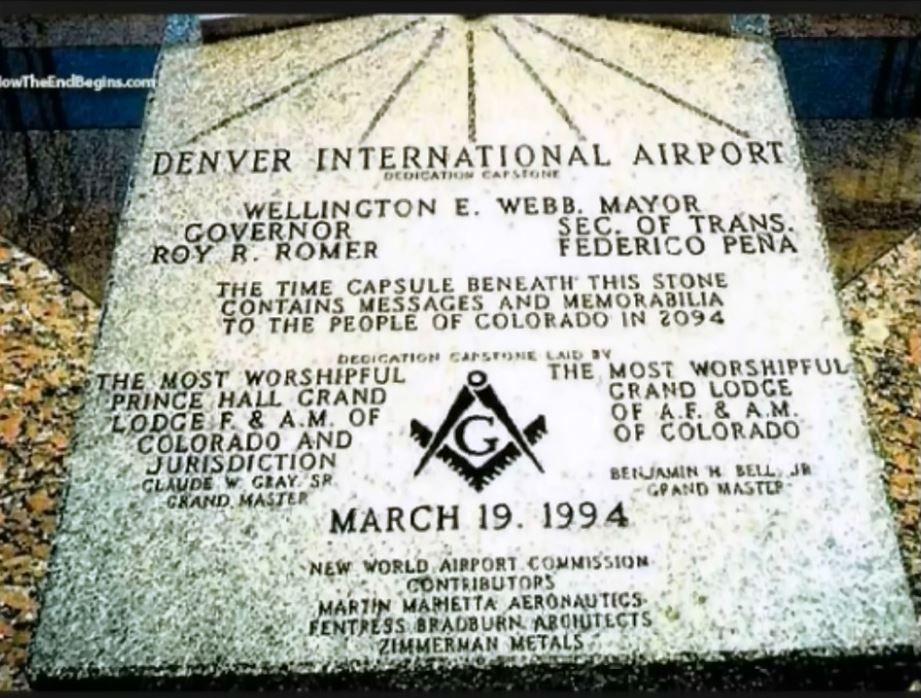 (not my photo, unsure who to credit)

The creepiest part of this theory of course is the unknown. There is a time capsule that was buried there on March 14th 1994. The inscription states that it should be opened by “the people of Colorado 2094” (guess I’m not gonna be around to find out what happens!). The capstone has to Free Mason symbol and mentions a group called the New World Airport Committee. While many state that this group doesn’t technically exist, there is evidence of a group like this existing in 1994 called the “New, World Airport Commission”.  The use of “New World” in its name does not help the case that it might be related to the New World Order. My thoughts? If gov officials/members of a secret group wanted to cover their tracks and create a false story of a World Airport Commission, who can stop them? Definitely an area for plenty of speculation in my opinion.

The Gargoyles protecting baggage claim: Not sure what to make of these guys tbh. I only paid attention enough to take a picture of one of them:

Pretty cool looking statue that towered above my head on the column it sat on. I thought his facial expression was hilarious and created a whole narrative in my mind that he was the troublemaker gargoyle out of everyone in his family. If he was meant to be scary he did not do a very good job.

A quick internet search of gargoyle representations will tell you that gargoyles are often placed on the outside of buildings to prevent evil spirits from entering the building. However, these gargoyles are indoors and are facing inside of the airport. In my mind, this begs the questions: what are the gargoyles keeping IN the airport??

Here is the other gargoyle I did not see but wanted to include a photo of: 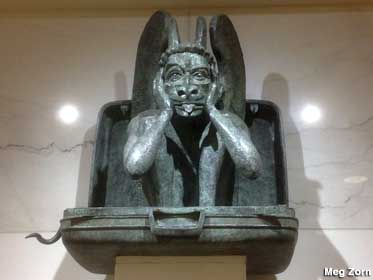 Why is he covering his ears? “Hear no evil?”

The murals are what I was really interested in checking out. I took all of the photos except for the last photo which I found online. Kinda glad I didn’t see that last one in the person. I only got a chance to really check out two murals the night I arrived, but I do plan on visiting again soon!

This was the first mural I saw and cmon right it is super wholesome. I was expecting darkness immediately but this was chill. The caption states “in peace and harmony with nature” and illustrates people of all backgrounds and ages coming together with animals and plants a picture of fluid harmony. I thought this was such a beautiful, idealistic image. But yall know far away from that we truly are (if you don’t crack open an article on US politics in 2018).

My initial reaction: what the fuck

My current reaction: what the actual fuck

I just….I don’t even know where to begin with this image. In its essence, it is a representation of death. Between the dead bodies of women and child, extinct animals, fires, pollution (see turtle), and weeping children, there is just so much darkness in this image. In my photo you can see the railing that stands between the viewer and the mural- that should alert you to the sheer size of such an art piece that depicts such violence.

However, I do feel like the previous caption “In peace with nature” kind of works here too. The cycle of nature is life and death in constant rotation. Living creatures live and die in our world and are mourned by their family once they pass. Forest fires happen naturally, especially in a place as dry as Colorado. While there is not exactly “peace” in this image, “nature” is illustrated in its rawest form.

I did not see this one in person but got a pic online. If that last pic made me say what the fuck then this one just had my jaws dropped, no words. Murals like this are the reason why people are questioning this area in the first place. There is this fully covered super soldier in Nazi-like apparal with a huge machete and then some kind of gun/knife combo piercing a dove (quick search: a sign of peace) while sleeping (or let’s be real potentially dead) kids sleep on bricks at their feet. Then along the side are crying mothers holding dead babies (saying this because the first baby is splayed out in a completely unnatural way- the mom is mourning). This is death and destruction by an outside force who does not care who it wipes out to get power. Yall think Trump got this hung up in his bedroom? Seems like the kind of portrait that will really get his blood flowing.

If this place was a post-apocalyptic headquarters for government officials, it clear that only a select few will get a spot in here (assuming that this is potentially a pay-per-room type of bunker). I definitely don’t like the feel of this mural at all. There have been other murals that were removed because of the images they portray (yet still can’t find any images of these online….). But seriously wtf!

let's talk about the world // nyc View all posts by KSS